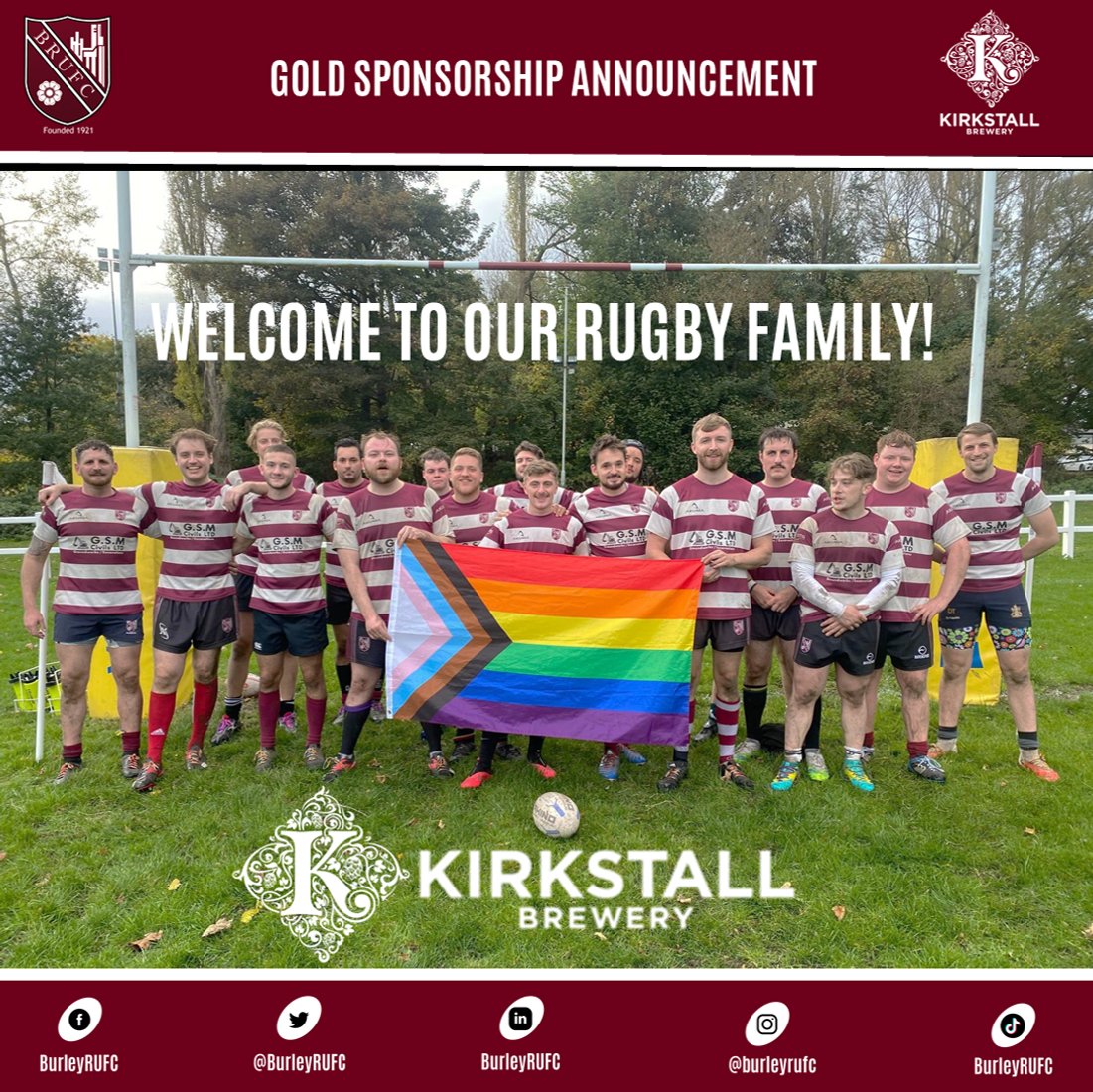 Kirkstall Brewery is Burley RUFC’s second gold sponsor for the 2022-23 season and beyond! The award winning Brewery has committed to a three year deal which will support Burley RUFC to enhance its training programmes, provide match time, support player development and undertake outreach to bring Rugby to the wider community.

Kirkstall Brewery’s sponsorship of Burley comes on top of its existing work local sporting clubs and social groups. Since its founding in 2011 Kirkstall Brewery has put the diverse communities of Leeds at the heart of its brand strategy by giving back to a variety of local sports clubs, societies and local charities.

Kirkstall Brewery’s award-winning line up of beer include gluten-free and vegan friendly brews along with well known classics including Virtuous, Three Swords and Judicious.

Johnathan Zemlik the Digital and Sponsorship Officer for Burley RUFC said:
“The club and committee are really excited that Kirkstall Brewery have agreed to partner with us. Kirkstall Brewery is one of Leeds’s most recognisable brands and one of Yorkshire’s biggest success stories of recent years, we are truly privileged to be working with such a great partner. The funding will support the club to build on our success to date and allow us to focus on outreach based growth within the diverse community we are a part of.”

Leeds has a long history of brewing beer, with the original brewers of the city being focused on the 12th Century Kirkstall Abbey, just behind the Burley RUFC First XV pitch. The Abbey founded in 1158 provided a self-contained community for the monks, including its own brewery located on the banks of the Aire. Kirkstall Brewery is the successor to this long legacy of brewing beer in Leeds.

Ian Galbraith Managing Director of Kirkstall Brewery said:
“We are delighted to support one of the area’s most diverse and inclusive sporting organisations, especially as they are just down the road from us! Burley RUFC’s location beside Kirkstall Abbey and championing of local causes makes them an ideal partner for Kirkstall Brewery. We can’t wait to see our name on the kit - and their players in our Taproom!”

James Everitt Captain of the Second XV said:
"I am so excited to have a local sponsor like Kirkstall brewery join to support the club. I know I number of the players already enjoy their beers and now having their support and recognition will give a real boost to the players"

ABOUT KIRKSTALL BREWERY
Kirkstall Brewery is Leeds’s premier brewer of craft beers. With a wide selection of beers for all appetites and occasions, including vegan and gluten free ranges. Kirkstall Brewery continues the legacy of brewing left by the Cistercian monks of Kirkstall Abbey and the Kirkstall Brewery Company of 1833-1983. The new company began as Vertical Drinks, importing the likes of Sierra Nevada, Odell and Stone as early as 2003, which allowed them to learn from the masters before starting our own brewery in 2011. Kirkstall Brewery got its grounding for the kind of beer it has become known for: bold, hoppy and without compromise.

Kirkstall Brewery has grown a great deal since then, and remains dedicated to brewing and serving truly great beer in all its beautiful variety, complexity and simplicity. They are also as proud of their pubs as much of their beers. Pride is built into the Kirkstall way of working, both the beers themselves and where they serve them, you can see first-hand their commitment to connecting the traditions of the past and the innovations of the present by visiting one of their 5 pubs around Leeds and Bradford. These include the Kirkstall Bridge Inn, the Cardigan Arms, the Kirkstall Brewery Taproom, and the Sparrow. These pubs allow you to experience Kirkstall Breweries’ best line-up of Beers on draught.

ABOUT BURLEY RUFC
Burley RUFC is one of Leeds premier Rugby teams for players from all backgrounds regardless of age, race, sexuality, or experience. We have a broad and diverse membership across our First and Second XV’s. These include players from local areas, players who have moved to Leeds, social players, student players and many active supporters. A large number of which are past players.

Founded in 1921 the club has a strong history but it also looks to the future by championing its diverse and active membership with thousands of followers across our social media.
In recent years the club has flourished, putting out two competitive teams and winning several tournaments. The club provides inclusive training, welcoming players of all abilities and training as one group to promote an open and diverse culture. This helps players develop their abilities and relationships within the club allowing us to be competitive in Yorkshire 3.

As the club has grown, we have continued to build relationships with other clubs in the area, including International Gay Rugby (IGR) teams, championing diversity within the sport competing for the Burley Pride cup.

Our aim is to aspire to the values of Rugby Union by fostering an environment of respect, equality, tolerance and teamwork. We promote co-operation, friendship and compassion both on and off the pitch.